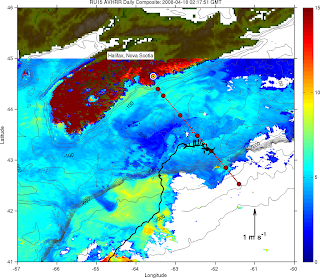 RU15 just surfaced 4.74 km away from HL5, the outermost shelf point on the Halifax line. We should be there sometime later this morning. At that point we'll make the turn in. Mostly clouds in the imagery this morning,
so we'll see how that develops. Currents have remained low, so its not as critical as it was in the Gulf Stream region. 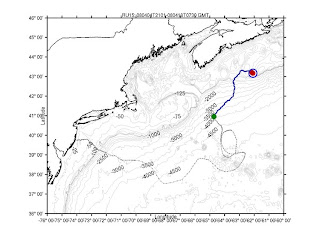 Here is the nearly final section that started when we left the Warm Core Ring, crossed the slopewater and shelfbreak, and made our way east to the Halifax line. Almost there. 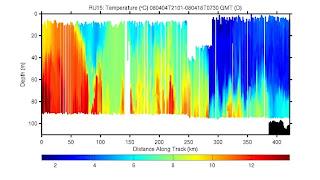 Temperature along the section. nearly the full water column on the shelf is cold, something our battery guru's will be watching. At the right end of the section, you can see the black shading for the bottom trace, indicating that the altimeter has now been turned back on (thanks Scott M!)

Once we hit HL5 and make the turn, we'll start a new section on the webpage and configure things for a standard cross-shelf line. There is a shipboard cruise going on right now, so we hope to contrinbute some scientific data to that project on the way in. A new area for us, but we benefit from a lot of local knowledge up in Halifax. Thanks again to all up there for sending their help to bring this thing in.
Posted by Scott at 2:48 AM