The Approach to Halifax 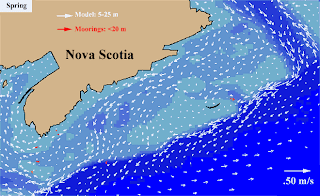 Scott McLean sent this image last night. Average currents on the Scotian Shelf for spring based on models and moorings. There is a nearshore jet that turns offshore at Halifax and heads straight south. Based on the mean currents, we don't want to approach from the south. An approach from the southeast would be better. 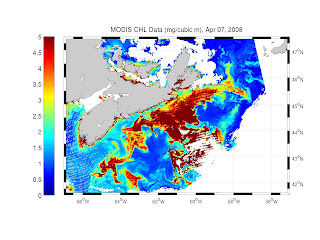 Marlon Lewis sent the Chlorophyll images above (April 7) and below (April 8). Both show high Chlorophyll (red) east of Halifax. The high Chlorophyll water turns offshore at Halifax, heading south, then southwest. Images look similar to the mean flow currents above. These images also say don't approach Halifax from the south. Try to stay in the water with low Chorlophyll (blue) that extends far north along longiotude 62 W. 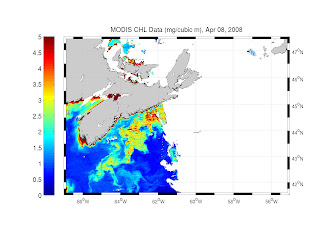 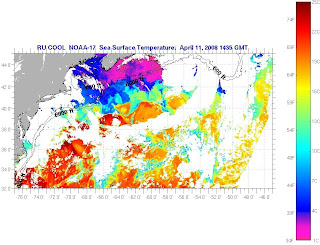 Last image in the story is the SST from April 11. Only clear image of the area in the last few days. The warmer water on the shelf (blue, 4C) extends
to the north along latitude 62W. South or Halifax, the very cold water (pink, 2C) is extending far offshore.
All this indicates that an approach to Halifax from the south would run into a steady headwind for nearly the entire crossing. It is better to work our way eastward into the relatively warmer (4C), and Chlorophyll free water, and approach Halifax from the southeast. We just changed the waypoint of RU15 to fly to the northeast into the favorable currents so nicely identified by our friends in Canada. Thanks Marlon & Scott.