A close call with a Gulf Stream meander 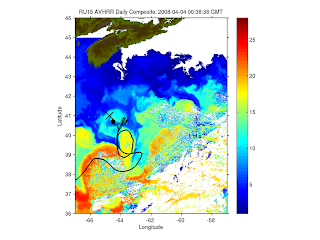 This picture pretty much tells the story from the last few days. RU15 was near the southern end of the warm core ring centered near 40 N, 64 W. We were spinning around the eddy just outside of the radius to maximum swirl velocity. As we were flying up the western side, the Gulf Stream meander creast that was too our west started coming our way. It seemed like the clouds opened up and there it was. The very next surfacing we turned RU15 more into the ring, and started flying towards the high swirl velocity. We needed to use it to shoot to the north out of the meanders way. We got in and we shot north, at speeds over a meter per second. Its a good thing we did, that meander crest has now propogated downstream to the east, right through the area we were flying in. Notice how the warm core ring that was elliptical is now being stretched out to the south as it is being absorbed into the Gulf Stream. That would have been us with RU15. A fast ticket south when we need to go north.

But then as soon as we were north of the meander crest, we had to apply the brakes. If we stayed in the fast swirl velocity, we would have been swept by the small eddy near 41 N, 64 W. If we missed the free ride from the small eddy, we'd have to fight against a cold headwind to get to the north. So we turned the glider perpendicular to the swirl velocity and started flying back out. We kept changing the waypoint to stay perpendicular to the swirl velocity, just as if you were swiming perpendicular to the rip current. This time around we were close enough to the edge to get out of the warm ring just in time to end up on the south side of that small eddy centered near 41 N, 64 W. We found the cold water that is being swirled around, and turned to the west to start following it around the new eddy. We'll conitune to swirl around this eddy till we get around to the northeast side, probably sometime saturday. Then we'll exit this eddy, jump back into the cold water and follow it to the northeast up to the next eddy up we saw up around 42N, 63W. We'll keep flying eddy to eddy till we make the shelf break. We can worry about most of that over the weekend. Cause tonight, we rest. RU15 is in the small eddy, riding some slow but favorable currents. We'll all get some sleep and check it out in the morning. Our robot is fine - for now.
Posted by Scott at 7:32 PM