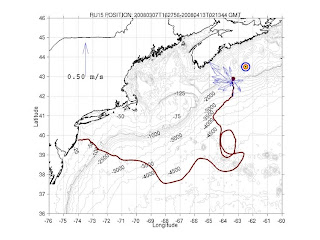 Here is the track map with the recent current vectors plotted. The new waypoint to the northwest discussed in the previous posting is shown. The issue was the strong currents to the west last night. We wanted to head east towards the Halifax Line, but we had no choice. Dave IM'ed in about 10 pm and said the currents are kicking RU15's butt. The deep ocean was pushing us west. So on friday night we decided to abandon the flight to the east on the deep side of the shelf break, and instead make the jump north onto the shelf, into shallower water, and, hopefully, weaker currents.
Dave changed the waypoint from straight east to straight north, and we switched to a stay deep behavior to avoid the stronger surface currents, flying between a depth of 30 m and 100 m. By morning we had crossed most of the shelf and were getting into slower currents. 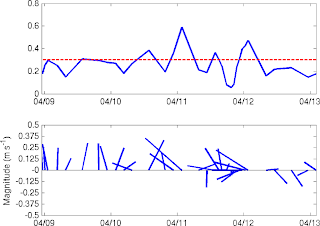 Here's the plot of current speed and direction during the crossing. Lots of strong currents to the west on 4/11 that caused the problem. But as soon as we crossed, currents turned to southeast and tried to push us back off the shelf. The good news - at least it had an easterly component. 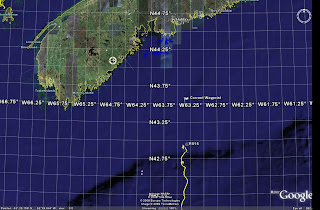 Here is a zoom in on the track. Our attempt to fly east did nothing but cause the small loop in the track just offshore the shelf break. We gave up on that and jumped across. Now that we are on the shallow side of the shelfbreak, we are heading northeast, towards the Halifax line and the favorable currents identifed by Scott & Marlon in the previous post. We are back to full water column sampling.
We have a much more restful night ahead of us.
Posted by Scott at 8:06 PM