On to the Next Eddy 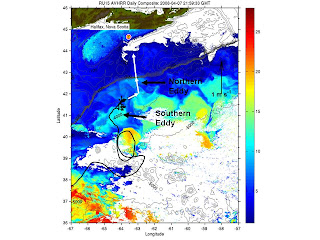 RU15 had a weekend of favorable currents that swept it clockwise around the western and northern side of the southern eddy. We exited on the northeast side. After leaving the southern eddy, we retasked RU15 to head to 42N, 63 W based on the last good satellite image. We were hoping to hit the bottom of the northern eddy. Within a few hours we had a clear spot in the clouds. The northern eddy was still there, and we where headed in the right direction. 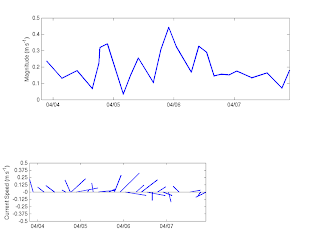 Heading up to the northern eddy we are starting to encounter a bit of a headwind. The last two vectors are opposing us. Still under 20 cm/sec, so we'll make progress against it. We'll let it run overnight to see if this persists.